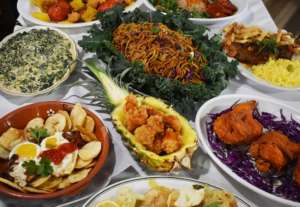 The road to opening The Path — the city’s newest Caribbean restaurant — was a bit longer and more winding than planned, but the wait is finally over.

After a six-month delay, The Path Restaurant and Lounge will be spicing up the SouthCoast food scene with its debut at the former Lusitano Restaurant site in the South End on Friday, Nov. 11.

With the sign expected to go up outside the 820 King Philip St. building this weekend, owner Gainer Forrester Brooks is finally seeing her dream become reality.

She said it’s great to be in the home stretch and she’s excited to welcome her first customers to The Path.

“I cannot wait, you have no idea… it’s been a journey,” said Forrester Brooks, who runs The Path along with husband Carl Brooks.

Forrester Brooks, a banker/investor with real estate in Boston and Brockton, purchased the mixed-use property in September 2021 to embark on her first restaurant venture.

She set out to breathe life into the King Philip building  – which housed the Lusitano, a well-known spot for traditional Portuguese fare for 50 years before closing in 2019 – as well as add to Fall River’s growing, diverse culinary destinations.

“I love challenges and I love risk. I’ve been working with people in the community and I’m grateful they saw the value and they too said we need to have a different style of food and culture,” said Forrester Brooks, a Brockton resident. “I think they’re gonna embrace the change.”

“We really do love Fall River… and we are glad we are here,” she added.

Since acquiring the property, which includes a first-floor restaurant, bar and function hall, 12 residential units as well as a parking lot, the pair have poured their efforts into modernizing the space. Earlier this year the building got a facelift, with new hardwood flooring, lighting, paint and upgraded fireplace. The kitchen also underwent an $80,000 renovation, which included all-new appliances and safety upgrades.

A grand opening at The Path is slated for Nov. 11, starting at 4 p.m., and the Fall River community and local officials are invited to stop by to get their first taste.

Caribbean and fusion cuisine at The Path

According to Forrester Brooks, a native of British Guyana whose husband hails from Jamaica, The Path’s menu will feature both Caribbean and American cuisine.

Dishes will include everything from lo mein and fried rice with a Caribbean twist, to various curried dishes, jerk chicken and pork, seafood plates, in addition to American fare such as lasagna and mac and cheese. Bar food such as fries, burgers and fish and chips will be served in the lounge.

Heading up the kitchen will be two chefs with background in Caribbean cuisine, including head chef Nikki Nelson from Jamaica, as well as Manuel Silva, a longtime chef at Lusitano.

Forrester Brooks said they are also looking to hire three to five more local employees, to round out a total of 5 to 8 kitchen and wait staff.

Future plans include the addition of brunch (hopefully by late winter) with items such as chicken and waffles served up with mimosas.

In an effort to promote the business, she said they are also looking to bring cameras into the kitchen to give patrons a behind-the-scenes look at chefs at work. The videos will be posted on their YouTube channel.

Forrester Brooks said their aim is to constantly find ways to grow: “Always be improving on our menu, on our service … the goal is to make this place exceed expectations.”