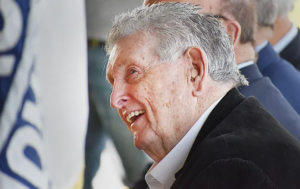 Former state Sen. Thomas Norton listens during the dedication of the City Pier in his honor on Saturday, Nov. 5, 2022. – Colin Furze

It’s been 40 years since the Fall River Redevelopment Authority took four acres of waterfront property on the Taunton River by eminent domain.

And finally, after four decades of contamination clean-up, redevelopment and the expenditure of millions of state and federal dollars, the public on Saturday had access to the newly named “Senator Thomas Norton City Pier.”

The RDA board voted unanimously to name the City Pier after the long-serving public official and Fall River native last May.

And Norton, the namesake of the new waterfront public way, was on hand with family, friends and politicians he mentored to celebrate the honor.

Norton, a state legislator in both the House and Senate for 26 years from 1972 and 1998 and representing Fall River, Somerset, Swansea, Westport and Freetown as an elected official, got more than a few laughs from a crowd of over 100 people attending the dedication.

He served as Senate Majority Leader for 6 years in the 19902.

“Sarah,” said Norton, addressing RDA Director Sarah Page, “Can you tell your board to thank them very much, because I never got a unanimous vote in my life.”

Norton, a military veteran, noted the waterfront was home to the memorials to service men and women, and Battleship Cove was the place where people from other countries have taken their pledge for citizenship for decades.

“This waterfront is alive with the United States,” said Norton.